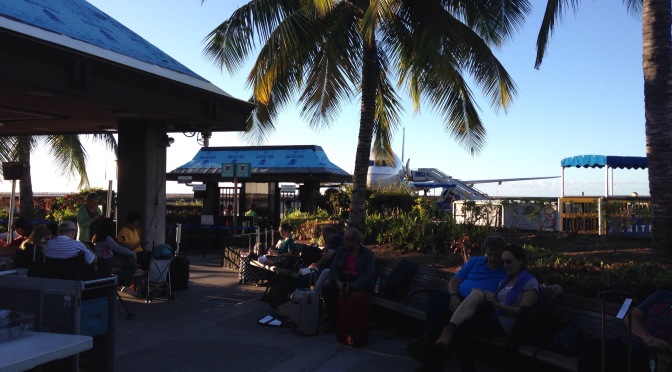 Our flight has been delayed leaving Hawaii about 2.5 hours now due to a flight attendant “getting hurt”. She now “has her prescription” so we are able to board (relatively soon). Despite my flight time average being at about 8hrs after the past year, I think it’s more than safe to say I spend more time in the airport.

I only had 48 hours home, and it’s now looking like I’ll have 44 hours in my hometown before taking off to move to London for 5 months. I am not packed for London. I am not completely unpacked from school. This is a nightmare.

Also, the airline staff working here is completely incompetent. I rather be in Brazil trying to figure things out in a different language than deal with this absurdity. The computer systems they have these already inept workers using is straight out of 1997 and I’m pretty sure I could program it myself. It’s actually one of those black screens with the white lettering, I saw when he completely turned his screen around to show me (I may have been annoying him even more than he was annoying me).

The United States does not fly by island time, that includes you Hawaii. THIS ISNT EVEN HAWAII AIR.